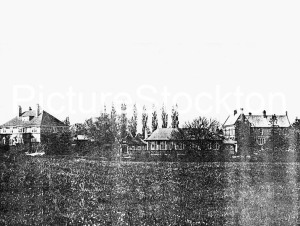 A view of the Grammar School and Rectory, Yarm. Yarm Grammar School was founded by letters patent of Queen Elizabeth dated 1588, and endowed by Thomas Conyers of Eaglescliffe, Gentleman, by will dated 10th February 1589, for 8 poor children of the parish to be elected after examinations by the minister and churchwardens. The school was re-organised by the Charity Commissioners in 1881 and rebuilt in 1884. School was endowed for £44 yearly, with 12 school governors. North Riding County Council took over in 1912 and served Yarm and many villages; Picton, Potto, Stokesley and Kildale.