The first photograph is of one of my old membership cards for the National Clarion Cycling Club with the “Clarion” horn in the badge. I have been a member of Teesside Clarion since 1966, a club that is still active under the continuing Stewardship of Colin Armstrong who in the 1960s was a National 5 mile Grass Track Champion. 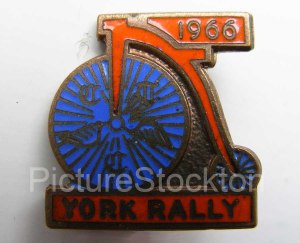 The pin badge photograph is of a badge from the 1966 CTC (Cyclist Touring Club) Rally held each year in York. In the 1960s the A19 from Teesside to York was a stream of club cyclists attending the Rally from Teesside.