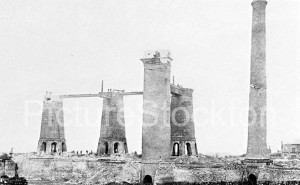 Norton Iron Works operated between 1885 – 1879 on a site near Station Road Norton, apparently the first “Big Ben” was cast here in the late 1850s… The Stockton Stone and Concrete Company occupied the Iron Works until the late 1960s. As kids  we used to play there, mainly on the weekends as we always thought it was a castle!