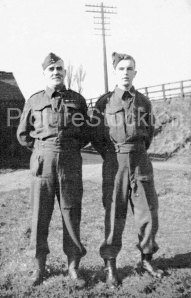 The younger man is his son Thomas William Birtle (my late father) who was only 16 when this photograph was taken. He had joined the Home Guard unit for Thorpe Thewles village.

The photograph was taken on the grassy area adjacent to the Norton Junction railway cottages.(facing where Harper’s garden centre used to be). During the war anti aircraft guns were stationed over the railway where the Roseworth estate stands today. The first time they were fired the blast was strong enough to bring the ceilings down in the railway cottages. This was not popular with the inhabitants.