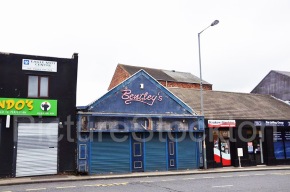 Bentley’s was one of ‘the’ places in Stockton to go and boogie the night away in and probably even before disco too?
Close by was Tito’s in Brunswick Street, The Birds Nest in Yarm Lane and I seem to remember through the alcoholic haze of time Cizano’s and Bianco’s both also in Prince Regent Street. The ‘big two’ in Stockton were of course The Club Fiesta in Norton and The Kirk in Kirklevington and long before The Mall and is subsequent re-inventions appeared!The front of Bentley’s was fully boarded over for a long time and then removed possibly for re-development so I thought I better photograph the frontage before it disappeared for ever. Good times! Taken 17 September 2017.