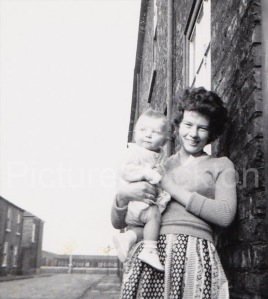 This photograph was taken outside my Granny Dobson’s house at 32 Elliott Street, Portrack. The school at the bottom of the street can be easily seen. I think the caretaker of the school was Mr Lee, I seem to remember he lived in one of the houses showing on the left of the picture, close to the school. In the photograph is my late younger sister Margaret with her son Gary. My late eldest sister Mary and husband Charlie married in 1948 lived with my gran in that house until they could get a place of their own.

My sister Margaret and husband Herbert also lived with my gran until they too found a place of their own in which to live. I think back in those early days it was quite normal for newly married couples to live with relatives until such a time something else became available. It never ceases to amaze me how large families were brought up in these two up two down terraced houses. I was also brought up in a similar house in Buxton Street in the Garbutt Street area. So sad to see those communities lost when moved on to the newer modern estates. I think only St Anne’s Terrace at Portrack is the only original site that remains from those days. Such memories.