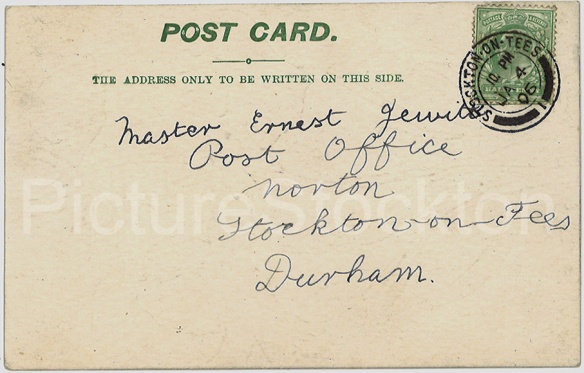 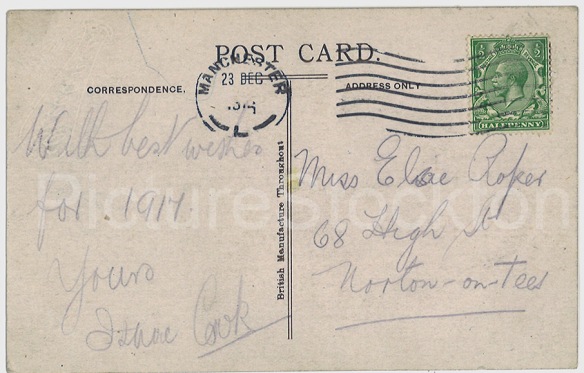 We recently had the above set of postcards donated to the Reference Library. Two of the postcards are hand painted images of flowers, and date back to early 1900’s.

After conducting our own research we found that Harry and Ernest were the sons of George Jewitt and his wife Jane (Jennie), who in 1901 was the post mistress at the Post Office, at no. 71 Norton High Street. George was born on the in Stamfordham, in Northumberland about 1864, and at the time the 1901 Census was taken his occupation was an engineman. George married Jane Moore in 1890, in Hexham, and Matthew Henry Jewitt (Harry) was born a year later in 1891, at Norton.

George Ernest Jewitt (Ernest), was also born in Norton on the 18th January 1893, and in 1900 a sister, Annie Lilian was born there also. Ernest grew up to become an accounts chief clerk, and in 1924 married Elsie Roper, who was almost the girl next door, as she lived at 68 High Street, Norton. Ernest and Elsie had 2 children – Margaret E. Jewitt, who was born in Stockton in 1924 and George R. Jewitt, born in 1932, also in Stockton.

We would love to give the postcards to a relative of Ernest or Harry. If you think you may be related to the brothers, please contact Stockton Reference Library 01642 528079 / reference.library@stockton.gov.uk