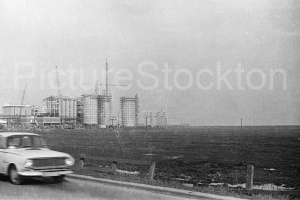 This was taken from the Hartlepool to Port Clarence road, the same day as I took the picture of the first of the Hartlepool reactors being built. This can be made out in the far distance. I believe that the photograph shows the initial stages of construction at the Venator site. It would have been one of the first chemical plants to be built in this area, which was nothing more than a desolate, swampy, windswept and totally uninteresting section of land that was being reclaimed from the Tees estuary.

3 thoughts on “Venator Site Under Construction”