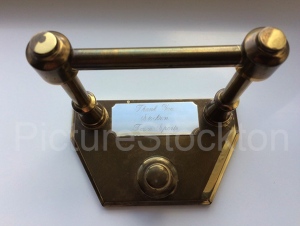 These two photographs show the letter rack presented to me in 1996/7 after my retirement having been the secretary and organiser of the annual Stockton Junior Schools Sports day from 1971 to 1995. This was held every June or July weather permitting from I believe well before the war, indeed the girls trophy for large schools being silver marked for 1939.

There were races for teams of children from the ages of 7 to 11, plus relays each having its own final. The races were held on Stockton Cricket Ground for many years and then in the latter years on the William Newton School field. Between 20 and 25 schools took place each year and to make sure all schools had a chance they were put into two categories, small schools and large schools depending upon pupil numbers. Unfortunately I believe that the association has ceased to function for many years although I believe the Cleveland ones may still continue. Some schools in the old Stockton Borough will no doubt still have trophies in their keep.