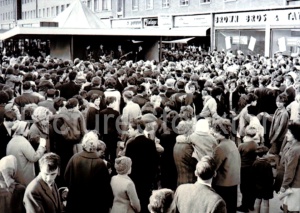 This is the Billingham I remember from my teenage years, it was a great place to grow up in, the council was very forward looking and live music in the Town Centre was one of many things they did to enliven the town.

The five piece band, the drummer is hidden in the middle, could be The Johnny Taylor Five, they were often to be seen performing in the Town Centre. I don’t know if the crowd were there to see the band or were already there and taking advantage of the live entertainment.

One of the things that sticks in my mind about Billingham Town Centre was the fact that you would always meet somebody you knew or somebody you didn’t know who would speak to you, always friendly, Billingham people.

Brown Brothers & Taylor was one of the first shops to open in the Town Centre, this was in the mid 1950s, Finlays was a favourite place for youngsters as they had a record department where the young ladies behind the counter would play records of your choice, as in Leslie Browns in Stockton there were a couple of listening booths where we would get crammed in and listen to records by the likes of Guy Mitchell, Lonnie Donegan, Adam Faith and many others, the staff were very good as they knew full well that we had no money with which to buy records and most of us didn’t even have a gramaphone, this is what we called them before record player became the usual name, on which to play them.

At this time Billingham had fish ponds and aviaries in the Town Centre, not acceptable nowadays but an interesting feature at the time. A very lively place.