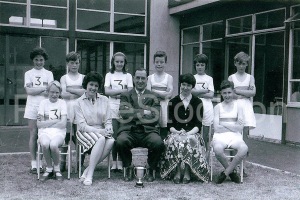 This photograph was given to me by my long standing friend John Hugill. We both attended the Roseberry schools, infants then juniors, between the years 1955 and 1962.

It shows a combined boys/girls running team taken in the school year 1961/1962. The male teacher is Mr O’Neil and the lady sat on his left is Miss Brooker. She was later married to Clive Bell who was head of Geography at Bede Hall. John can’t recall the other lady teachers name I’m afraid.

So onto the team itself starting with the boys. Going left to right in the back row we have Peter Bolton who’s still going strong in Billingham. The boy to his left is of course a very young Willie Maddren who went onto to find fame as both player and in time manager of Middlesbrough FC. He died quite a few years ago from Motor Neurone Disease.

This leaves the 3rd lad in the back row which is John Hugill himself. It’s worth recording that in this school year John was Head Boy. Looking back it must have been an average year!

This leaves the boy in the front row who is Geoff Mills. I’ve no idea what became of him but a pleasant lad from memory.

It’s also worth pointing out that all 4 of the boys were members of the all conquering Roseberry football team in that school year which won a league and cup double under the management of Ian Archer. ”Archie” was everyone’s favourite teacher.

John remembers the names of two of the girls. In the back row standing between Peter Bolton and Willie Maddrew is Diane Stephenson and the girl in the back row next to John Hugill is Lynn Harrison. We did used to have inter schools athletics meetings and John thinks the team may have been competing in something on those lines.

I really like this photograph and I hope you do as well. Mixed relay teams, whatever next!?