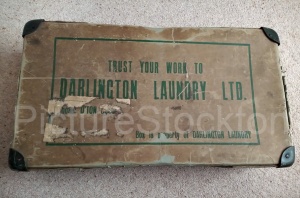 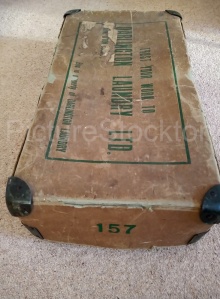 I came across this laundry box in my loft recently. I think it might have come from my Grandmother’s house. She lived in Thornaby from about 1940 till 1972. I wonder if the company still exits.

The House Of Wax was an early 3D film, it was made in 1953, the Globe has 4 showings in one day and it appears that it was being shown for quite some time as the “Final Week” notice indicates.

I remember my parents going to see a 3D film in the early 1950s, it was probably at Billingham Picture House and much later than the initial release, my Father was unimpressed and my Mother thought it was “All Right”, damned by faint praise, as the saying goes. The main thing I remember was wearing the red/green spectacles the following day at school and having them confiscated.

3D cinema was never a success, it was unrealistic and unconvincing and very expensive to make, I have seen a number of I-Max films over the years and they are quite good but I don’t think they improve the cinema going experience, they can be quite novel for a short time but they do pall. 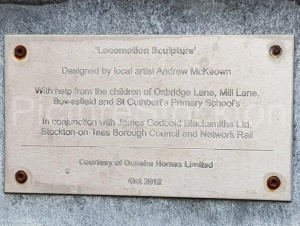 Recently there has been something of a commotion over Locomotion No1 and the plans by the National Railway Museum to move it from the Head Of Steam Museum in Darlington to their own collection at Shildon, named no less – Locomotion! With the bi-centenary of the Stockton and Darlington Railway less than 5 years away I’m sure we can expect more letting off of steam over this in the coming weeks!

I suspect that very few people know that we have our very own Locomotion No1, albeit, a very impressive artwork in Spring Street off Yarm Road? The sculpture was designed by artist Andrew McKeown who has completed many large sculptures and artworks within the Tees Valley and all with a theme of growth, change and renewal often combined with historic references as here were the old terrace housing alongside the railway track was demolished to make way for a new modern development. This was the first time that I had seen the sculpture without any obstructions in front of it and thought it too good to miss. 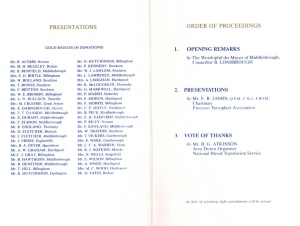 Images of the order of proceedings for the presentation of gold badges to local blood donors. My late mum Doreen Birtle was one of 6 people from Billingham being honoured. For many years donors could only make two donations a year so reaching 50 was a real achievement. I think mum finished up in the top 60s before she was stood down. 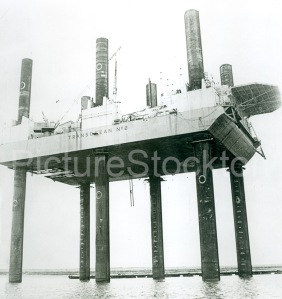 Head Wrightson made the legs for this drilling rig. 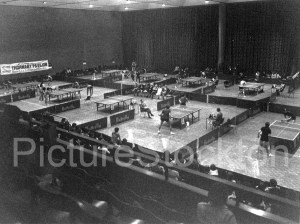 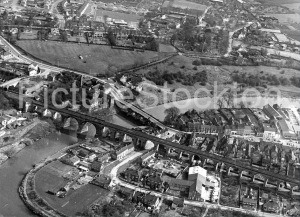 n aerial view of the Viaduct and Yarm c1978 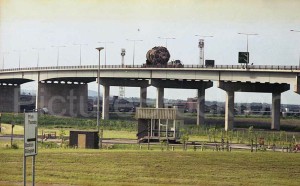 A Sunters vehicle carrying a large load over the A19 Tees Flyover.

An undated picture of the Robinsons building when it was probably at its architectural peak. It looks like it was in the middle of being decorated to celebrate an event.
It shows all the detailed features that were later simplified/removed (mostly on or at the roof level), before the canopy was added and the entrance modified to its current configuration (corridors between display windows).

Image and details courtesy of Jonathan May.

The phrase “A picture is worth a thousand words” could have been coined for this image, I don’t think it needs any explanation. One thing I do like is the horse looking straight into the camera while all around are oblivious of it. 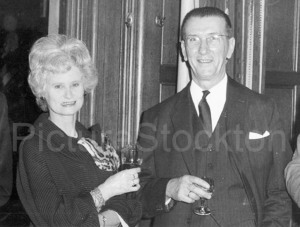 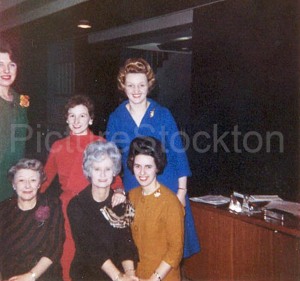 My aunt, Miss Maysey Stewart’s retirement dinner event including Miss Milburn who succeeded my aunt as Head of Division Travel and Visitors Section for ICI. Unfortunately I don’t recognise any of the other faces, does anyone else? 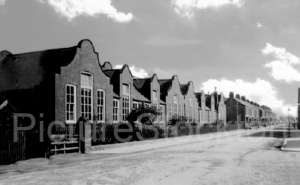 Haverton Hill School was in Windsor Street, it served both boys and girls but they were segregated, for many years, Les Jobson was headmaster at the boys school and Miss Yule or Yuill (spelling uncertain) was the girls headmistress. Les Jobson later became the first director of the Forum theatre. The school, along with a large part of Haverton Hill disappeared in the 1960s/70s. 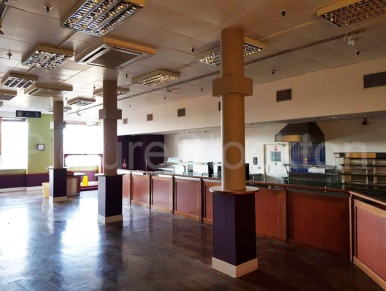 Photographs taken on the final day (Wednesday 15 January 2020) in the life of the store which has probably almost single-handedly kept Stockton High Street afloat over recent years and will be sorely missed by so many people and for so many reasons, including nostalgia by many Picture Stockton visitors.

The store was quite busy with people queuing at the tills waiting to pay for the bargains they had found. But as you can see from the photos the store was very empty and shelves were clear, ready and waiting to be dismantled with the cafe area long gone…

The photograph shows Stockton High Street, I think around 1900, but I’d welcome comments.