These pictures taken during a visit to the Billingham Branch bridge by the Newcomen Society, comprising people dedicated to the history of engineering, show that the track bed of the link from the Swainby Road area round to Port Clarence and the south part of ICI Billingham had long been removed. Charles Morris, from Eston, who had been active in getting the bridge preserved, is seen describing the bridge to the group. He was a senior figure in the Institute of Civil Engineers and also chairs the local Cleveland Industrial History Group.

A clearer picture shows Charles along with Dr Jonathan Aylen, of Manchester University, on the left and myself, Dr Fred Starr, the two people who had organised the Newcomen visit to Teesside. Coming from Portrack, I used to wander along this track on many occasions, without understanding the historic importance of the bridge.

When Reverend William Cassidi died, Vicar’s Bridge was erected in his memory by Cassidi’s family and parishioners of St. James’ Church, Thorpe Thewles. 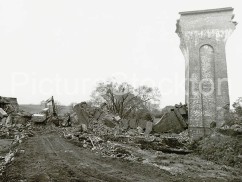 A view of the last remaining pillar of Thorpe Thewles Railway Viaduct (built 1877), after its demolition, and a mechanical excavator sorting out the rubble. The photos also show the demolition team and Laura Grainger (standing on Wynyard Road) who set it off. One pillar remained standing after the demolition on June 3rd, 1979.

A view of West Street and the Viaduct at Yarm c1962. 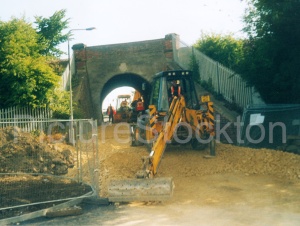 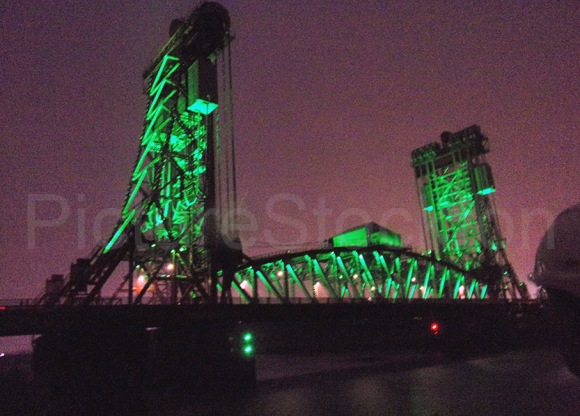 Occasionally the new set of lights on the Newport Bridge are put on for a short display. Stainton’s, over at Billingham Reach, who installed this well engineered set of computer controlled LED lights, will, work commitments permitting, provide the manpower to do the full show. However, permission comes from the Highways and Transport Department in Stockton who are responsible for the Newport Bridge and any the impact that the lighting might have on traffic. Accordingly demos tend to be in the late evening.

Members of the Newcomen Society for the Study of Industrial History, who were up on Teesside for the first time, were lucky enough to get a chance to see what it was like, and viewed it in the middle of a late evening thunderstorm. Everyone got soaked. But the display was not a washout, with the thunder and lighting adding to the excitement. These pictures don’t do justice to what was seen.

This railway bridge stands over the access road to the Moorhouse Estate off Yarm Road in Eaglescliffe and I think I’m right in saying that this line was established by the S&DR when they moved the original single line track slightly to the west and out of the grounds of Preston Hall ?
The Richardson family were originally timber merchants but established an iron foundry at Castle Eden near Hartlepool and later purchased the Hartlepool Iron Works to build ships engines and boilers. In 1900 Richardsons formed a partnership with two other local companies to become Richardson Westgarth, a huge employer in West Hartlepool and a name synonymous with heavy and marine engineering and later in the nuclear industry before their demise.

This was taken from the bottom of the top flight of steps, below the footway across the Transporter. Since I last took such a picture in 1985, the waste incinerator near the Newport Bridge has gone and the Princess Diana Bridge has appeared. After all the demolition on the ICI site, it is surprising that the big nitro tower in Haverton Hill is still there. 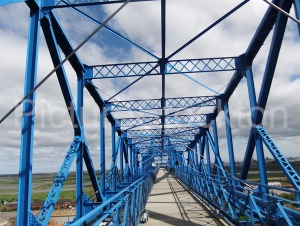 This picture was taken from the North Ormesby area on a bank which forms part of the Eston Hills. The Transporter is in the centre of the picture. Off to the left the twin stacks of North Tees C power station can be seen. Haverton Hill can barely be discerned through the industrial haze. The white smoke is probably not pure steam, in some cases at least, and looks more lethal. The small group of chimneys on the right hand side is part of the South Durham Steelworks at Cargo Fleet.

During the 1950s and 60s most industry either continued with coal for fuel, or switched to fuel oil. Natural gas as beginning to make an impact and this led to a big clean up in the atmosphere. But in 1972 I would guess that at least half the houses on Teesside were still burning coal and the lower Tees Valley tended to hold the pollution from these even in the summer. It would be interesting to see a more modern picture, if this viewpoint is still a grassy bank.

Taken on 14th May 1966 about the time the new bridge came into use. These photographs show freight trains heading up Stockton Bank hauled by Q6 locos nos. 63397 and 63407.

Primrose Hill Footbridge giving access over the rail tracks from Dundas Street to Ford Street near the gasworks. The second photograph shows steps which led down to the site of the rail shunting sidings.

The decorative lamps on the Victoria Bridge were cast by John Butler at the Stanningley Iron works near Leeds. Taken c2015.

The Victoria Bridge was officially opened in 1887 and replaced the earlier five-arched stone bridge. 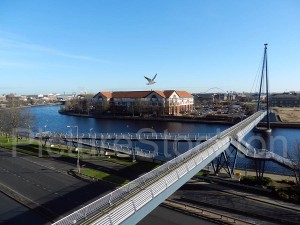 A view of the Millennium Footbridge taken from the Castlegate Shopping Centre, Stockton. Across the river is Teesdale Business Park and beyond that the curves of the Infinity Bridge. Taken February 2014.

The historic Billingham Branch rail bridge was a major advance, being the first in Britain to be built using welded steel construction. It was built in 1932 to carry the approach road to the Newport Lift Bridge, over the Billingham Branch Railway, which was itself quite new, coming into service in 1920.

The pictures show that both the internal and external design have been beautifully laid out, with the vertical members being cut to form a curved shape. It could easily be taken to a bridge that had been designed in the late 1970s.

The man in one of the pictures is Mr Charles Morris a distinguished civil engineer from Teesside. Some years ago he was responsible for strengthening the haunches of the Billingham Branch Bridge as they were tending to move inwards. According to Mr Morris, soil conditions in Teesside are not good for heavy civil engineering projects, and this has made bridge construction quite difficult.

These photographs were taken in September 2014 and give some indication of the corrosion of the reinforcement of the bridge pillars and cross beams. Although it does not look good, the effects are mainly superficial. The rusting of the reinforcement has led to the spalling of the concrete at the edges of the beams and pillars. I understand that the cross beams are covered with

fibre glass and epoxy resin, not for structural purposes, but to prevent pieces of spalled concrete falling onto maintenance staff. The problem areas are fenced off from the public.

I was being shown round by an experienced retired civil engineer, who although stating that bridge construction over and around the Tees was challenging, because of the poor soil foundations, adding to costs, didn’t mention any particular problem with the A19 road bridge. 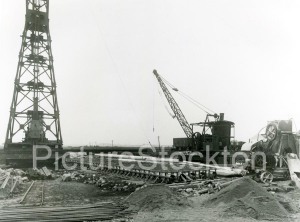 This photograph shows the foundations being laid for the construction of Billingham branch bridge c1932.