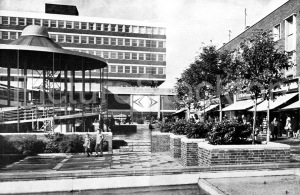 When I was a schoolboy in the early 1950s I remember the excitement of the new shops being built, initially where the photographer was standing was a road known as Queensway, there were only shops along the right hand side of this photograph, the building at the bottom was yet to be built, if you could have stood in the same spot in 1953 you would be able to see along the length of Roseberry Road as far as Wolviston Road/ Billingham Bypass, if you were to walk to the fence alongside the bypass and look across the open land you would see the “Russian’s” farm on Sandy Lane, the next village would be Thorpe Thewles, amazingly if you stood in the same spot now you would see the “Russians” farm is no more and the land is a golf course but there are still open fields, woodland and meadows as far as Thorpe, this area was my playground as I was growing up.