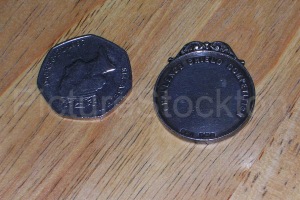 My granddad Thomas Wybert Birtle. He spent most of his working life on the railways starting with the North Eastern Railway (NER) in 1913. In the early 1920 the NER management introduced a football competition called the North Eastern Railways Cottage Homes Challenge Shield. This was a large trophy donated by the NER deputy chairman Lord Joicey. The competition was all above board having been sanctioned by the Football Association and attracted over 60 teams from within the NER organisation.

The final for the 1922/23 season was held in May 1923 at Victoria Ground Hartlepool and attracted a crowd of over 800. In the event the locals won with a team from Hartlepool winning 1 nil. The beaten finalists were a team from Stockton railway sheds with my grandfather playing in defence. It would appear that all the players were given a silver medal and find attached pictures of Granddad’s medal. For sizing purposes I’ve placed it next to a 50p piece.

Of course Granddad had played football during the Great War. He joined up in 1915 in his local regiment the Durham Light Infantry (DLI) but by 1917 he was in the Highland Light Infantry (HLI) based in Dublin. The Scottish regiments always took their football very seriously and with Granddad being a decent footballer he was an acceptable recruit for the Scottish lads. So see attached football team picture captioned the 15th battalion HLI football team Dublin 1917. Granddad is standing in the back row extreme right. He always said that one of his team mates played for Aberdeen and Scotland after the war showing how seriously they took their football.

So we have a proud Englishman playing for a Scottish football team in Ireland. Can he claim to be an international footballer ?.

I understand that Granddad was involved with the Stockton Town club in the 1920s but I don’t have any more details.

4 thoughts on “Granddad liked his Football”