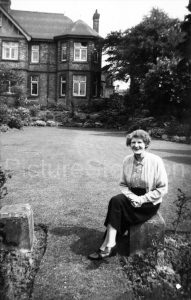 This is a picture of my Great Aunt Elsie (Lenham), and I believe one of five siblings to the second wife of my great grandfather (not sure how many children he had to his first wife who sadly died, but my grandfather Thomas Arthur was one of them. My great grandfather and grandfather at one point in time lived next door to each other in Lawson Street, Stockton). Great Aunt Elsie worked as a housekeeper and is said to have worked for Judge Cohen who I believe lived on the corner of Yarm Road and Hartburn Avenue which is now the site of a nursing home called Saint Mark’s I think. This will obviously by stretching people’s memories but can anyone confirm this please.