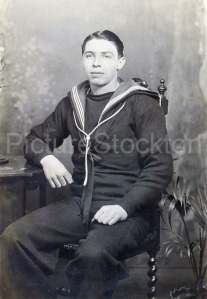 This photograph shows my Grand-Uncle William Henry (Ernie) McDonnell in a Dunfermline Photographic Studio, before he joined the Light Cruiser H.M.S. Calliope in July 1915.

Ernie born c. May 1897 at 30 Maritime Street in Stockton-on-Tees, was the first son of George and Maria McDonnell. 5′ 4″ William Henry grew up in the old Quayside district of Stockton, living variously at 12 Smithfield, 26 Garden Place, 8 Commercial Street, 10 Tees Street and by 1914 at 3 Paradise Street.

He was a Stoker in the Royal Navy during the Great War; he served from July 1915 aboard HMS Calliope, a modern, oil fired, light cruiser, which was hit by shellfire from German battleships at The Battle of Jutland in May 1916. He was awarded chevrons for his part in the battle and was granted his 1st Good Conduct Badge in July 1918 for 3 years ‘VG’ conduct in service.

Photograph and details courtesy of Anthony Pearson and the McDonnell family of Stockton.