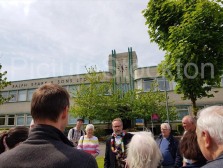 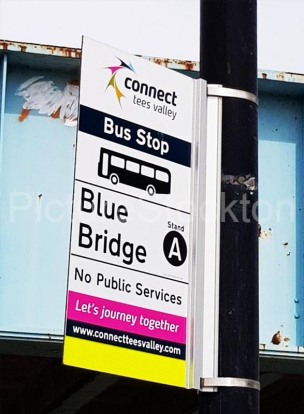 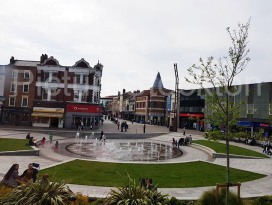 Roll up, roll up, for the Mystery Tour, step right this way… and we did as we crossed Norton High Street to our Cleveland Transit double decker bus time machine in the company of our Time Lord for the tour, Martin Peagam. Our first stop was to Norton Road to what most people will have known as Hill’s but which was originally a flour and saw mill until it was bought by Thomas Hackworth and George Fossick and made into an engine works were they built steam locomotives, one being named ‘The Stockton’. They also built ships steam engines and eventually marine engineering became their main line of business. It then became Blair’s Engine Works and with Hill’s now long demolished it is now the site of a new housing development opposite the North Shore Academy, itself built on the site of the former Tilery Sports Centre.

We went to Alberto Street next and heard the tale of a ‘lady of the night’ and her death in a boarding house which once stood there although the area is now a large car park and only the street name remains!

The Daylight Bakery was our next stop and little did Ralph Spark and Sons know that some of Stockton’s greatest footballers would train and hone their dribbling skills under the floodlights at the front of this superb art-deco building . Apparently the bright lights at the front of the building would attract youngsters from around the area so that they could extend their playtime hours in near daylight all year round such was the brilliance of the lights but whether or not this accounts for the ‘Daylight’ title I’m not sure but it certainly was an illuminating tale!

Mr Fossick got his second mention of the tour just a little bit further up the ring road at what is now known as the ‘Blue Bridge’ because simply put, it’s painted blue. This new bridge was built to allow the then new ring road to go under the railway line but at the same time the original Fossick’s Bridge was filled in and buried under the railway embankment leaving no trace at all except for the road to nowhere which still remains Darlington Road while the ring road became the Ring Road or if you prefer, the A1027?

Our next and last stop was to the site of the former Norton Iron Works on Calf Fallow Lane were the original ‘Big Ben’ bell was cast. Sadly though it’s not the Stockton bell which now rings out from the Houses Of Parliament today as our bell cracked when a larger than required clapper was used and a new bell was recast by another company. Perhaps that story chimes with you?

On the way back to Norton the bus took a short detour through Stockton High Street and so fulfilled it’s mystery tour billing much to the amusement of both it’s passengers and the public it passed who rarely if ever these days see a double decker bus, not even a green Cleveland Transit one. Roll up for the Mystery Tour, roll up, satisfaction guaranteed…. and indeed it was.