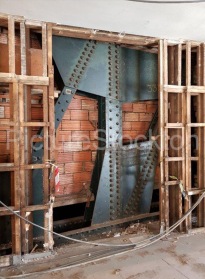 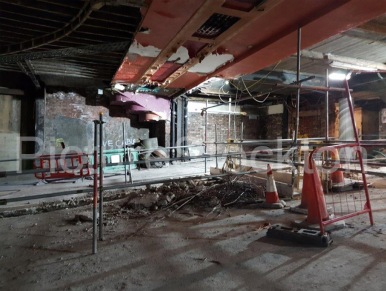 The Globe Theatre has been holding behind the scenes tours throughout the year and I was fortunate to ‘tread the boards’, well – very nearly anyway, during a visit in June which was lead by Sophie the designated SBC Learning Heritage Officer. After something of a stuttering start the renovation of this former 1930’s art-deco theatre is now back on track with builders Willmott Dixon taking ‘centre stage’ and driving the project through to a planned Spring 2019 opening of what is hoped will be a 3,000 seater nationally renowned live entertainment venue were the likes of The Beatles, Cliff Richard and Mike and Bernie Winters, Mike and Bernie Winters ?, all performed as well as local amateur dramatic groups and touring dance and ballet companies .

The tours begin next door in the former offices of the Cordell Group were you are kitted out in boots, hi-viz jacket and a hard hat and the now obligatory ‘elf and safety briefing before being taken into the theatre for what is a fascinating look behind the scenes with the building stripped bare to reveal it’s solid construction which remains solid to this day some 80 years later and which accounts for it’s longevity and survival when lesser building would have crumbled and been demolished. The huge stage area is very impressive and the boxes and balconies to either side still survive with some of the original paint and décor still to be seen and come the re-opening the colours and hues will be faithfully replicated wherever possible. The Globe has it’s own Facebook page were you can follow the progress of the restoration project and post your own memories and recollections of your visits to the Globe be it as a theatre, cinema or bingo hall.